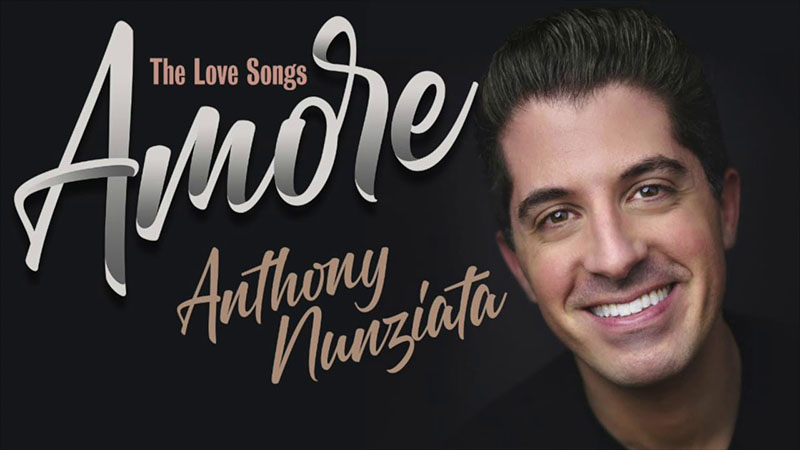 Tickets for Anthony Nunziata can be purchased online or by calling:
The Robinson Grand Ticketing Center at (855)-773-6283.

To seek a refund for any ticket purchase you must purchase
Ticketing Insurance that is offered at the point of sale.
with online purchase only.

The way Nunziata feels, "I'm in the business of making people feel good, making people happy. I'm grateful I get to tell stories for a living through lyrics and music. To make people laugh, cry, feel something -- there's nothing like it."
He has performed over 400 concerts over the past decade headlining major performing arts centers, theaters, symphony concert halls, jazz clubs and private events across the country and around the world. The Brooklyn-born, classically trained singer is hailed by Broadwayworld as “an explosion of love and entertainment.” Anthony recently co-headlined Carnegie Hall for two sold-out concerts with the New York Pops Symphony Orchestra. Anthony recently appeared in the Netflix film "The Last Laugh" opposite Chevy Chase and Richard Dreyfuss.

His songs have recently been featured on MTV, Comedy Central, CBS News, NBC News and Good Day NY. His original pop song "The Gift Is You" - which he wrote honoring his mother's battle with breast cancer (she is now cancer-free) - is currently being used as an anthem for The Susan G. Komen Foundation.

Anthony recently released his debut jazz/pop release "THE LOVE ALBUM," now available on all streaming services and autographed CD's available for purchase at www.anthonynunziata.com. He and his Grammy-winning team of musicians re-imagine “Unchained Melody,” “Can’t Take My Eyes Off Of You,” “Can’t Help Falling In Love With You,” “When I Fall In Love,” “Somewhere,” originals including “Will You Be My Everyday?” and many more.

Anthony has brought his fresh take on classic & contemporary songs as well as his movie-bound original tunes across the United States and around the world to performing arts centers, theaters and private events, as well as intimate jazz clubs and symphony concerts with orchestras such as the New York Pops, Detroit Symphony, Cleveland Pops, Colorado Symphony, Lancaster Symphony, Kravis Pops, Annapolis Symphony, Plymouth Symphony, Cape Cod Symphony, Toledo Symphony, Edmonton Symphony Orchestra and more. He has performed at private events across the United States and recently in England, Spain, Italy and Singapore.

Anthony studied music, acting and directing at Boston College, and trained in improv comedy at the famed Upright Citizens Brigade in New York City. Featured on Good Morning America and The Rachael Ray Show, Anthony is most proud of his "ARTS MATTER!" Educational Outreach Initiative and Master Class Workshops that educate and inspire students to fearlessly pursue their passions. Artist website: www.AnthonyNunziata.com.

The opening for Anthony will be Amici at 7:30 PM!