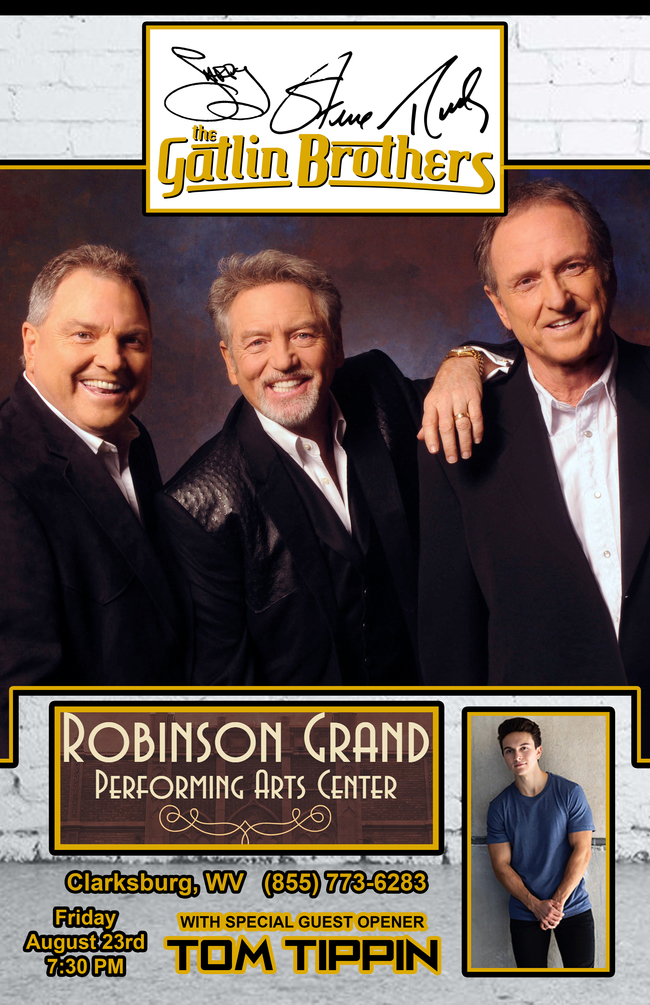 For more than 62 years now, the Gatlin Brothers have entertained audiences in some of the world’s largest venues and from some of the most iconic stages, including the GRAMMY Awards, the American Music Awards, the People’s Choice Awards, the Tonight Show with Johnny Carson, Oprah, Hee Haw, Love Boat, the Midnight Special with Wolfman Jack, the Merv Griffin Show, Solid Gold, the Barbara Mandrell Show and their own variety special on ABC – “Larry Gatlin and the Gatlin Brothers."
The Gatlin Brothers have been dazzling audiences for more than 60 years. It all began in Abilene, Texas in 1955, when Larry was six, Steve was four, and Rudy was two. Since those days, the road the brothers have plowed has won them countless awards and has taken them to numerous concert halls, festival stages, national television shows and even the White House on several occasions. The brothers have seen their music top the charts and touch the lives of fans of all ages.

TICKETS GO ON SALE FRIDAY, MARCH 1st at 10am EST.

Doors & Box Office Open at 6:30pm with showtime at 7:30pm. Full Concessions and bar will be available.

ABOUT THE GATLIN BROTHERS
Larry, Steve, & Rudy, the Gatlin Brothers are a Grammy Award-winning trio who have dazzled audiences for more than sixty years with a lifetime of noteworthy achievements in their storybook career, including a Grammy for Best Country Song (“Broken Lady”), three ACM awards for Single of the Year (“All The Gold In California”), Album of the Year (Straight Ahead) and Male Vocalist of the Year for Larry Gatlin, along with five nominations for CMA Vocal Group of the Year, Single, Album and Male Vocalist of the Year. (DOVE Awards – AMA’s – PEOPLE’S CHOICE info here) The Brothers have accumulated 7 # 1 Singles, 32 Top 40 Records, 22 Studio Albums and 5 BMI “Million-Air” Awards. Larry ranks 4th as Solo Writer’s with the most self-penned top 40 Billboard Hits! His massive song catalog has been recorded by the Who’s Who of entertainers, including Elvis Presley, Barbara Streisand, Johnny Cash, Roy Orbison, Glen Campbell, Kris Kristofferson, Sir Tom Jones, Dottie West, Charlie Rich, Johnny Mathis and dozens of others, securing his legacy as one of BMI’s top solo songwriters of all time.