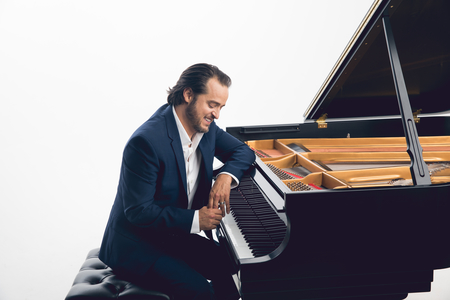 Paul Cardall is currently one of America’s most successful independent artists. A gifted pianist and prolific composer, Cardall spans many genres including Classical Crossover, Contemporary Christian and New Age, and in doing so has garnered 3 #1 albums on the Billboard charts.
Paul Cardall is a Steinway & Sons sponsored pianist from Salt Lake City, Utah. His music reached #1 on the Billboard charts three times and has been streamed over 2 billion times worldwide. He averages 25 million monthly listeners on streaming platforms like Pandora and Spotify. On top of being an award-winning pianist, Paul Cardall is also a film composer, music producer, and entrepreneur who founded his own record label and premiere recording studio. His music is commonly categorized in Christian, classical crossover, new age and independent. He has collaborated with CeCe Winans, Audrey Assad, The Piano Guys, Ellee Duke and many more. Paul's soothing melodies are born out of his passion for helping others overcome hardship through the power of music. Through this, he finds wisdom, depth, and understanding to heal the hearts and minds of listeners all over the world.

Paul was born with only half a functioning heart, which required immediate surgery. Doctors didn’t believe he was going to survive his life-threatening congenital heart disease or CHD and although he made it through the surgery cardiologists told his parents not to plan on Paul living beyond his first year. Fortunately miracles happen. As a teenager he underwent a handful of corrective open heart surgeries. Later, at the age of 35, Paul’s heart began to fail once more. He had to patiently wait 385 days before receiving his donated new heart. After these difficult surgeries, Paul found a renewed vigor for life. Nine months to the day after his surgery, he summited Mount Olympus in honor of his organ donor. During this time, he created the Paul Cardall Family Foundation, a nonprofit organization dedicated to those affected by CHD. He established an endowment at Salt Lake Community College offering scholarships to college students with CHD.

In 1999, Paul founded Stone Angel Music: a label providing services in artist development, merchandising, and recording. The Stone Angel Music studio has won awards for “Best Film Score - Utah Film Awards for Ephraim’s Rescue” and “Best Original Score - The Most Beautiful Thing in The World,” and has also recorded multiple Billboard charting artists. The Stone Angel Music Record Label currently has nine signed artists, and has released over 50 instrumental and compilation albums. Stone Angel Music’s most recent album release, Worth Of Souls, is a musical journey to help listeners uplift their souls and fight depression.

Beyond creating music and running a business, Paul is a speaker and philanthropist. He regularly details his congenital heart disease experiences at medical conferences across the country, and served as the keynote speaker at both the Texas A&M Leadership Conference and the Children's Hospital of Philadelphia Cardiology Conference. Paul also has presented several seminars on the music industry, including the MusicBiz Conference, TEDxNashville, and at various universities such as University of Florida, Brigham Young University, and San Diego State University. Paul has also been recognized with an Honorary Doctorate of Humane Letters from the Utah Board of Education.

Paul’s upcoming project is a Christmas album to be released during the holiday season in November 2018.

This performance is made possible by the Barbara B. Highland Fund for the Arts.

The Barbara B. Highland Fund for the Arts provides community grants, and funds to The Cultural Foundation, for the engagement of fine arts presentations of a national scope for and on behalf of the people of Harrison County, WV.

Each person is on their own path to wellness; however, everyone shares a goal of living a longer and healthier life. Healthy Harrison is a coalition with a vision to measurably improve the health and wellness of the citizens in Harrison County. It is our hope to motivate, educate and inspire the community to begin taking micro-steps towards a healthier lifestyle. Find out more at HealthyHarrison.org.